Stories and songs are one of the most powerful ways to put things in the brain and help students remember. Here are some simple storytelling techniques you can use with your students to help make teaching fun! Through stories children can learn all sorts of things. They can learn about colors, about patterns, about structure, or any number of valuable life lessons.

For this story you’re going to need a regular file folder, some colored pieces of paper, markers, and some creativity! Start by cutting an image of a cat out of the front of your file folder and gluing the story to the back of the folder. Then decorate the folder with whatever you’d like. To make this story work, you’ll place multiple colored pieces of paper in your folder: black, blue, red, yellow, green, and black again.

Once you’ve got the folder made, it’s time to tell the story!

Here’s the story from From Dr. Jean:

One day Scat decided he was tired of being black. He wanted to be a new color so he said: CHORUS. (Remove the black sheet of paper to make the cat blue.) And he changed blue! Scat went down to the pond to look at himself in the water. Unfortunately, he fell in, and he couldn’t swim. Timmy Turtle came along and helped Scat get back on shore.

Scat decided he didn’t want to be blue any more, so he said: CHORUS. (Remove the blue sheet of paper to make the cat red.) And he changed red. He went walking down the street, and everybody started laughing at him. “Whoever heard of a red cat!” they said.

Scat decided he didn’t want to be red any more, so he said: CHORUS. (Remove the red sheet of paper to make the cat yellow.) And he changed yellow. Scat went walking in the woods, and who did he run into but his cousin Leo the lion. “Grrrrrr!” roared Leo. “I’m the only cat who can be yellow.”

Scat decided he better not be yellow any more, and he quickly said: CHORUS. (Remove the yellow sheet of paper to make the cat green.) Scat wanted to play with his brothers and sisters in the grass. He tried to play with them, but he was green like the grass, and they couldn’t see him.

Scat decided he didn’t want to be blue, or red, or yellow, or green, so he said: CHORUS. (Remove the green sheet of paper to make the cat black.) Scat knew that being himself was the best thing to be. And do you know what? Being yourself is the best thing you can be, too. Because there’s nobody else exactly like you. And I like you just the way you are!

Using a regular file folder with felt attached to the front is a simple way to get your students to practice creative storytelling. You can cut out pictures of your students, yourself, animals, trees, or whatever you’d like, attach Velcro to the back of each one, and let your students’ imagination run wild.

This activity allows students the chance to start forming their own stories based on past experiences or completely new ones.

All you’ll need to make this one work is an orange piece of paper and some scissors. Start by placing the orange paper and scissors in your lap. As you’re telling the story you’ll be cutting out different parts with the scissors as indicated. By the end your students will have a full pumpkin house!

Once there was a little old lady who lived in a funny orange house near name of your school. Her house was shaped like half a circle with the chimney at the bottom.

This little lady had a cat named child’s name in your room. This cat had a long, curved tail, so the old lady had a special door cut just for the cat’s tail.

The little lady always wore a pointed hat. She had a special door built for herself, too, so her hat would not fall off every time she went in and out the door.

The little lady had two pet birds. Their names were child’s name and child’s name. She had a window cut just for them so they could fly in and out and in and out.

It was getting close to Halloween, so all the children in teacher’s name classroom went to her house and knocked on her door. The little lady came to the door and said, “Close your eyes.”

Just like the Pumpkin House Story, this has you creating something while telling a story to your students. You’ll need construction paper, scissors, and some markers. As you read the story, follow the instructions. By the end your students will have a baby bird!

It was spring time and mother and father bird decided to build a nest. Who can tell me some of the things they might have used to make their nest? (Fold the paper in half and cut accordingly.)

Mother bird sat on the nest and laid a beautiful egg. (Open the nest to reveal the egg shape.)

Now, mother bird could not leave the egg. She had to sit on it and keep it warm and safe. Even when it rained and the wind blew hard, mother bird had to sit there and protect her egg. Fortunately, two little bugs who lived in the tree made friends with mother bird and kept her company. This is one little bug. His name was _____. (Use a child’s name in the class.)

(Draw a little dot for the bug.)

This is the other little bug. Her name was _____, (Use another child’s name in the class.)

(Draw another little dot on the opposite side.)

One day as mother bird was sitting on the egg, she heard a little cracking sound. She looked down and saw a little crack in her egg.

(Cut a little slit on the fold slanted toward the eyes.)

Then she heard a great, big cracking sound.

(Cut around the eye and slit as shown stopping before you get to the end of the egg.)

And guess what mother bird saw coming out of the big crack in her egg? She saw her baby bird!

(Open the egg and bend up the beak as shown.)

For this you’ll need a chalk board and chalk, large paper and marker, or an overhead and marker. As you tell the story you’ll be following the instructions and drawing different features on the board that eventually create the shape of the dog Bingo!

One day my dog Bingo ran away.
I went to the park to see if I could find him.

When I got to the park I accidentally
stepped in a pile of bumblebees.
The bees swarmed all around me.

I wanted to get away from the bees
so I jumped in a pond of water.

I still needed to find Bingo, so I ran
to the top of a tall hill.

When I got to the top of the hill
I saw two doors with two doorknobs.

I knocked on the doors, but nobody was there.

I ran down one side of the hill.

Then I ran down the other side of the hill.

Has anybody seen my dog Bingo?

Adaptations: Have the children repeat the story with you as they draw their own dog.

Check out our Youtube Series with Dr. Jean for more ways to make teaching fun! 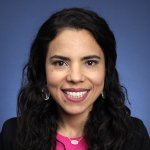 Erika Pozo is an education specialists working for the Early Childhood Team at ESC Region 13.

Classroom Setup During Covid-19: Floor Tape is Your Friend!

Get the best of ESC Region 13 in your inbox